Festival goers on molly tested, turns out most of them took bath salts

Festival goers on molly tested, turns out most of them took bath salts

When EDM kids at music festivals in Miami, Atlanta and Tampa were asked by researchers which drugs they did, they said: weed, ecstasy/molly/MDMA, LSD, cocaine, amphetamine, mushrooms, ketamine, and more — in that order of popularity.

Not one said "bath salts" — otherwise known as "cathinones."

Then, researchers took samples of the partiers' spit, and tested them.

At one festival in Atlanta in 2017, more people had bath salts in their bloodstream than MDMA. Clearly, the EDMers thought they were buying molly/ecstasy/MDMA, but they were being sold something else.

These cathinones are mostly legal in the United States. They used to be sold in head shops, above ground. They were labeled "bath salts" or "plant food" as a ruse, so the cops wouldn't bust anyone. They got a bad rap when a few folks ate off some faces and/or tried to rape some other folks.

But bath salts apparently feel good enough that you can pass them off as molly and folks don't notice.

A half-dozen other bath salts were found as well. Some of the bath salts the researchers had never seen before, they reported in a paper called "Monitoring Changes in the Novel Psychoactive Substance (NPS) Market through Enhanced Identification of Emerging Drugs and their Metabolites in Biological Samples." The paper comes from The Center for Forensic Science Research and Education at the Fredric Rieders Family Foundation. It was funded by the Department of Justice.

Overall, EDM drugs are more powerful and more diverse in their contents that they were four years ago, the paper's lead author, Alex J. Krotulski, told Rooster Magazine.

The main "bath salt" that researchers most often found in the bodies of partygoers is dibutylone, along with its sibling butylone.

[The highly-similar structure of butylone — a "bath salt." It's increasingly passed off as molly at EDM shows, according to a new report.] 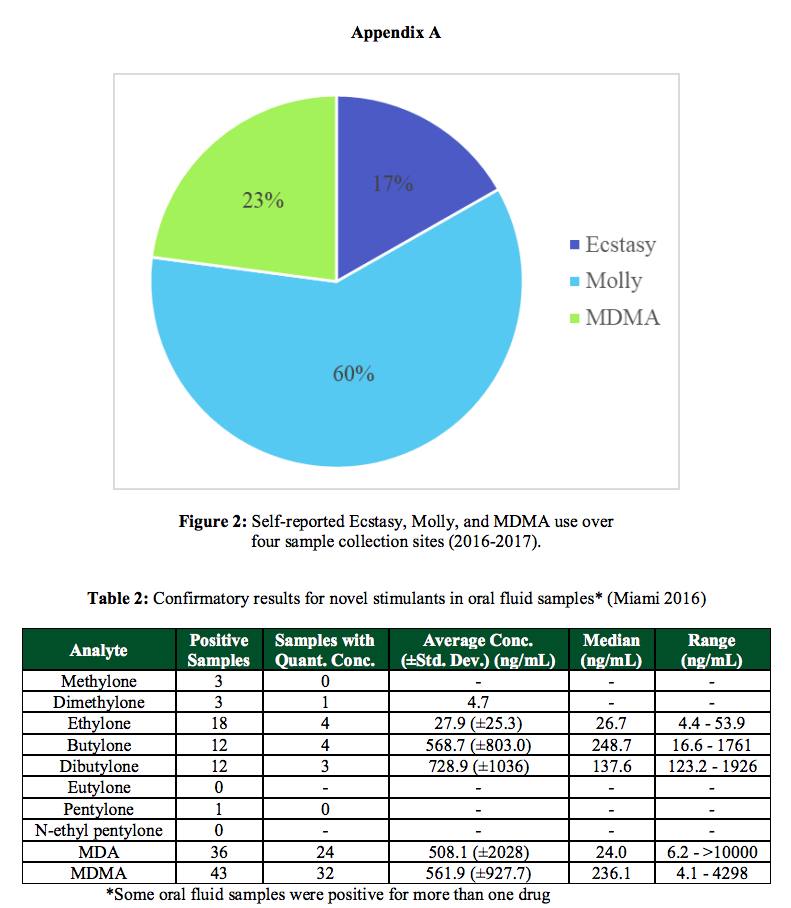 Online reports say butylone feels a lot like MDMA. (Molly used to be cut with methylone, another cathinone, but then the fuzz clamped down on one of its key ingredients, and so it's almost never used anymore, according to the paper.)

Drug safety advocate Adam Auctor was not stoked when he was told about the paper's findings.

"People are being sold something they didn't ask for," Auctor, head of the drug testing service Bunk Police, told Rooster. "If you're going to take a drug, then you should be able to know exactly what it is, and make decisions based on that."

Why are cathinones going into molly? Safety and money. You won't usually go to jail for having cathinones like butylone, while MDMA will get you slammed. And butylone is cheaper than pure MDMA, and easier to get. And if customers can't tell the difference — and the report suggests they can't — it's easy cash.

One more interesting finding, though: the researchers tracked users from 2014 through 2017. Over that time, the percentage of kids testing positive for MDMA shot way up. This means more kids are actually getting some MDMA in their molly, as opposed to purely bath salts.

Auctor suspects two reasons for the uptick in actual MDMA:

1. It's actually getting easier to get real MDMA, mostly thanks to the dark web.

2. More kids are actually testing their stuff thanks to outfits like Bunk Police and DanceSafe and, if it's not molly, they're flushing it.

[cover photo of synthetic cathinones, from the DEA.]